This story was send to me by Mark Stanway from Phil Lynott’s band Grand Slam. He is glad to share it with us all.

In March 1983 I visited Lombard Studios in London to see my old mate John Sykes who was working with Phil Lynott on the final mixes of ‘Thunder and Lightning’. After that we all went back to Phil’s house in Richmond to have a drink or two.
I ending up staying the night at Phils and the next day Phil asked me if I wanted to play keyboards on his solo tour of Sweden scheduled for July and August.
I was very proud and of course I immediately accepted the offer and looked forward to this new opportunity.
During July 1983 I learned all of the songs for the show which included songs from Phil’s solo albums songs as well as a few Thin Lizzy favourites We did not actually rehearse together until we all met up in Stockholm one day before the first gig. It turned out I rehearsed everything in the wrong key.(Phil Always always tuned down a semitone from concert pitch.)
After all the band sounded great and Phil was very happy with the line-up and the way the band was sounding. The entire Swedish tour was a complete success and total joy to be a part of and to this day I have never seen so many attractive females at every show, this really was a serious taste of being a rock star!
Later on once again I stayed over at Phils after a Magnum’s show and ending staying on and off for a year or so. It was decided after the final Lizzy show that the same band that played the Swedish tour should stay together and become a permanently new group. This group would become ‘Grand Slam’
Brian Downey and Doish Nagle both went back to Ireland whilst Phil , John Sykes and I started to write new songs for Grand Slam. In between much partying in London we started to get some good songs and ideas together, however, during this time John Sykes got a call from the states making him an offer he couldn’t financially refuse from Whitesnake. Phil nearly was about to give up the whole idea of Grand Slam. I convinced Phil that we should carry on and introduced him to close friend Laurence Archer, a 21 year old wiz kid on the guitar. I had met Laurence earlier that year. It was perfect as far as I was concerned as Laurence only lived two miles up the road in Twickenham and Phil was soon won over by Laurence’s talent so Grand Slam was back on target.

Phil’s mansion in Richmond was a superb house with a large converted garage at the rear which was an 8 Track studio where we used to do all of our writing and rough demos. Phil’s house was a magnet for many visitors. Many musicians would visit and we would end up jamming many times with the likes of Brian Robertson (ex Thin Lizzy) Gary Moore Philthy Animal (Motorhead’s drummer at the time and recently passed away) Junior Giscombe who had had a recent top ten hit with Mama Used to Say. We all used to jam a lot.

Many weekends, especially to get away from the London scene Phil would come back to my house in the midlands to stay with me and my wife and family, Phil loved kids and was a real family man underneath all of his stardom and would often enjoy a quiet weekend at my house sleeping on the settee and enjoying a proper home cooked Sunday dinner away from the limelight. People in my hometown could hardly believe it but actually soon got used to me walking into my local pub with Phil and just have a quiet drink with friends.

I really miss Phil, rest his soul and I am so proud to have been such close friends with him and indeed to have worked with him performing the likes of ‘Parisienne Walkways’, ‘Whiskey in the Jar’ and the ‘Boys are Back in Town’ etc along with the many Grandslam songs I co-wrote with him. Phil Lynott: A true talent, a real gentleman, a genuinely funny man and the epitome of a Rock Star. 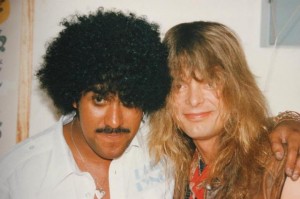 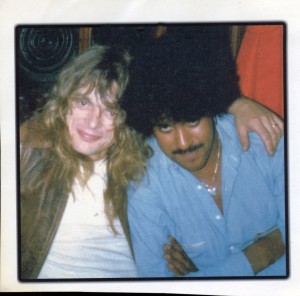 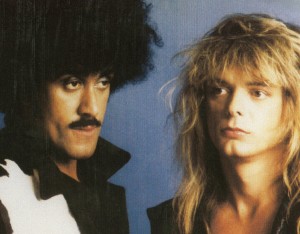